What a really miserable day Saturday was.  I woke up to grey skies and a cool wind, but hoped that the weather would improve.  I had offered to help on the bookstall at a Charity sale in Chasseneuil, but because it was being held outside in a garden, I was really not looking forward to it this year.  It is for Cancer Support , and our local branch of Charente Plus which covers Charente, Charente-Maritime, and Haute-Vienne.
As I left home, to be on the spot by 13h30, so the rain steadily began to fall. By the time I arrived in Chasseneuil, it had eased off a bit and we managed to set up the stall. Just as we finished, so it started to rain again and I was given a tarpaulin to throw over all the books. 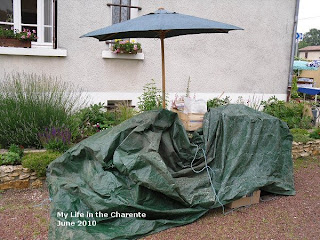 Other people were setting up their stalls, but mostly they were under gazebos. I had one umbrella which covered very little of the book stall!  ‘Salvatore’ the Italian hair dresser was offering his services, also under a gazebo; haircuts for whatever donation you felt like giving. 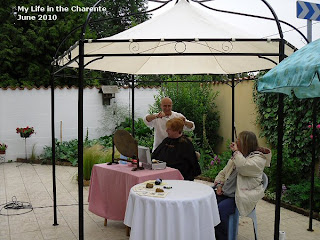 I had my hair trimmed while it was raining for a donation of 10€, I pay around £10 in the for a dry cut, and 20€ in for a hair cut and wash.  (They do not seem to do dry cuts where I go!).  Whatever, I thought that I had done pretty well for the price, and as the rain kept tumbling down I was glad of my shorter hair and I felt quite light headed!! 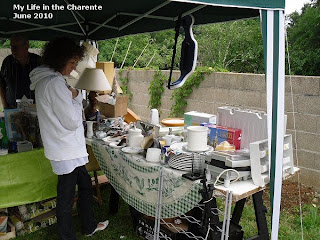 The weather did finally clear for a short time and I made a few sales, but it was not long before I had to cover up again, then uncover, and cover yet again.  Meanwhile everyone was complaining about the cold and there were a few blue coloured people about the place!  I had dressed for the middle of winter, boots and all, and I think I was one of the very few who did not complain.  I hate the cold and try to think ahead. 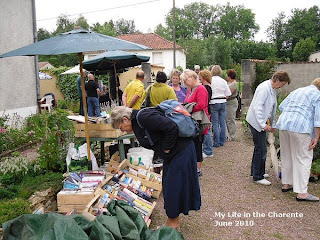 We all packed up at 17h00 in the rain, but surprisingly it seemed that finances were not as low as expected, and maybe all the hard work was worthwhile. People did brave the elements and it certainly could have been a whole lot worse.  It will be a couple of days before all monies are tallied up and we know how much we made.
On Saturday evening, Vitrac Saint Vincent had a musical fireworks display. During the day they had a children’s football match and lots of funfair events. Sunday was also to be devoted to games and fun fair for the children.  Our neighbours, Nicole and Jean came for an aperitif on Friday evening, and Jean’s comment was that it was well suited for us!!  Jean had his 70th last year!!
By 20h00, the clouds had lifted, and there were a few very small spots of blue showing through the fields of grey ‘cotton wool’.  I had planned on cycling to the feu d’artifice, as there is very little parking, and I thought a midnight ride home (weather permitting) would be fun.  I even had all my winter cycling gear here, so what was to stop me – well the weather might have!!  By 21h00 the sky was showing quite a lot of blue and the sun was showing a few silvery rays; the cold wind though did not let up.  21h30, and not a cloud in sight; this must be the first time in well over a week we have seen the magic of sunshine!
I left home just before 22h00 and on arrival in Vitrac I discovered all was peaceful and quiet, not a body in sight anywhere!!  I listened hard in the silence and picked up a distant sound, which I homed in on, to discover that the whole event had changed venue from last year and it was being held at the football stadium.  Unfortunately, I gather this was not a popular venue and numbers were seriously down on last year.  Personally I think the weather may have had a lot to do with it!! 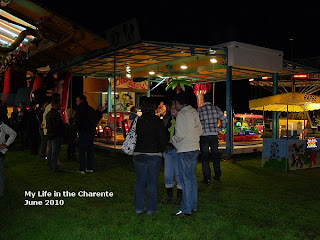 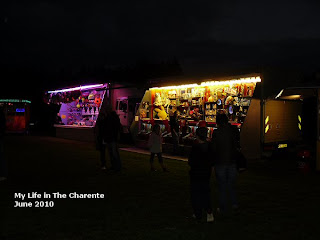 Nevertheless, there were a number of children having fun and even if not well supported, the feu d’artifice (firework display) was excellent. 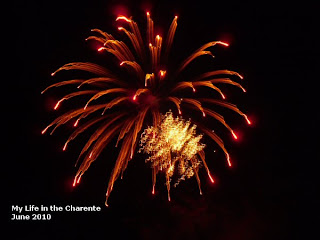 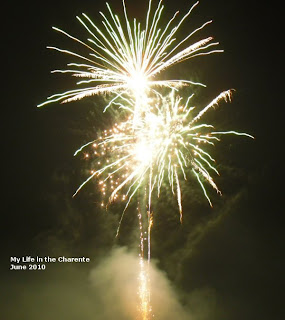 I cycled home afterwards, arriving at my door just a couple of minutes before midnight.  Jean and Nicole were worried about my lights on the bike until I switched them on and they saw how bright they were.
I might add, as I do this post on Sunday morning, I have lit the fire as the lounge is so cold!  June is supposed to be summer! instead of this, we have dismal grey sky and a bitterly cold northerly wind blowing.
Posted by Diane at 16:46

Labels: Cancer, Fireworks, Round and About