I thought for a change today I would post pictures of some of the bugs I snapped  recently.  Another post for Joan!

The spotted asparagus beetle causes the most injury in the early season when the adults attack the growing tips and sometimes eat the buds of newly sprouted asparagus. The beetles also feed on foliage, eating out irregular areas. The larvae cause little damage because they feed inside the berries. 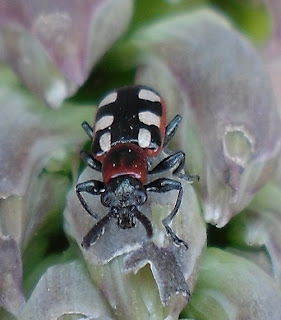 As you can see, it has been chewing away at the tip here.  I am now manually removing them as I find them.  I understand that they do not like tomatoes and that they are a good deterrent.  I have planted my tomatoes alongside  the asparagus, so I am hoping that as the plants are now growing well they will chase beetles off!!

This caterpillar was racing across our verandah; nothing I could do would slow it down, so taking  photos was not easy.  I never knew they could go so fast....
The Oak Eggar, Noushka's identification Here Thanks 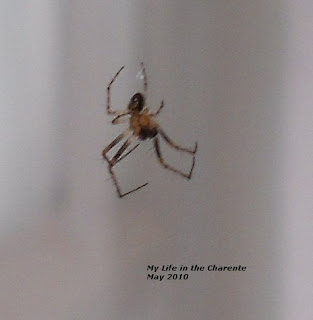 This very tiny little chap was literally hanging by a thread.  It was so small. that I was unable to get a very clear photograph with my small digital camera. 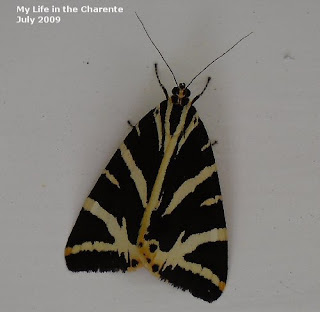 This beautiful Tiger Moth was on my window sill last year. 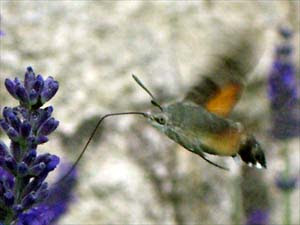 Photo from http://entomophonix.files.wordpress.com/2007/07/macroglossums.jpg
This stunning Humming Bird Hawk Moth (Macroglossum stellatarum) is back in our garden now that the lavender is just coming out.  The wing speed is so fast, and they move so quickly, that my little camera has no chance of taking a picture. it has a very long proboscis which shoots out to gather nectar and you can actually hear the humming sound from its wings.
There has been a recent threat to this beautiful moth, this being the Mexican Evening Primrose which is now being widely sold in garden nurseries.  The plant is a death trap to the moth due to the nature of the hypanthium, which is very long and narrow in this flower.  The moth finds that its proboscis becomes firmly stuck and is unable to free itself.  The trapped moth remains there flapping until it slowly dies. Please note if you have this plant in the garden it is best removed for the sake of the moth. (see magazine: Living Poitou Charentes Aug/Sept 2009) 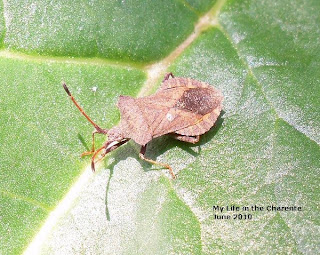 Our rhubarb seems to be breeding these fellows, they look a bit like a stink bug of some kind but maybe someone will give me some answers. Any idea Joan? 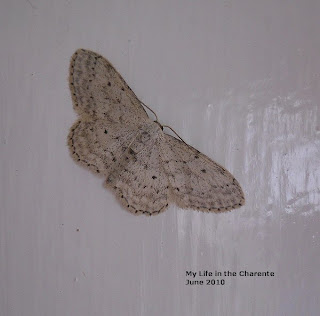 This very small moth was quite difficult to see on the white door. Nigel spotted it long before I did. 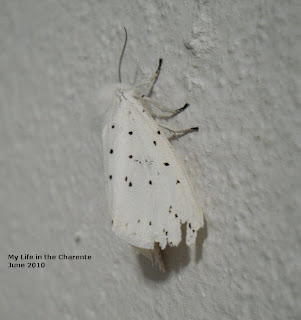 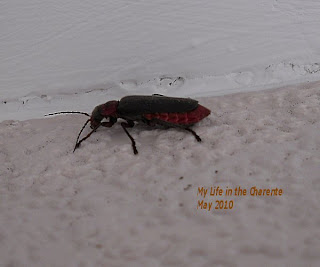 This unknown beetle was in the house.
Posted by Diane at 15:56